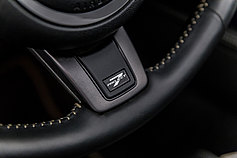 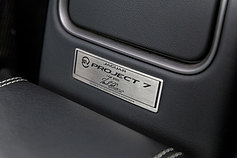 Contact our Sales Staff for the Jaguar Project 7 now.

The Project 7 is a collector’s sports cars with a limited run of just 250 vehicles worldwide. It is the fastest and most powerful Jaguar of all times. Developed by Jaguar Special Vehicle Operations (SVO) with only one purpose in mind - driving pleasure in its purest form.
The Project 7 was inspired by Jaguar’s proud racing past. Its name derives from the seven Jaguar victories at the famous Le Mans 24-hour race. Three of these historic victories came in a legendary 1950s D-type, which recently celebrated its 60th anniversary. The designers were briefed to design a modern-day D-type. The Jaguar Project 7 is the unique result. "The Project 7 captures the essence of Jaguar racing heritage in its purest forms. It's a stunning celebration of passion, team spirit and the designing process itself. It is a true Jaguar... It is a new classic!" so the head of design at Jaguar about his most spectacular work to date, which obviously originates from the legendary D-type.

It is also no coincidence that the Project 7 is visually close to the legendary Le Mans racing car that won the race three times in the 1950s alone: The windshield has been reduced by almost 12 cm, the side windows cropped and behind the driver's seat, the headrest with its shark-fin-like fairing reaches back to the expansive rear spoiler; there is also a new bumper with a front air splitter, and of course, the interior features bucket seats where the driver and the passenger can, upon request, buckle up with a five-point harness. You will look in vain for an electric convertible top: If there is a cloudburst, there is no way to get around manually pulling up the convertible top. Concerning the Project 7, one thing is clear from the outset: there are certainly more comfortable sports cars on the market, but only very few that will convey driving pleasure so directly to its passengers.

The engineers paid great attention to the handling, which has been enhanced considerably thanks to extensive work on the front end. The slight staidness that has previously been seen in the Coupé and convertible is gone without turning the F Type into a pure racing car, as project leader Duncan Smith underlines time and again. The front springs were tightened by eighty percent, the steering column is substantially stiffer, and the negative camber of the front wheels has been tripled to 1.5 degrees. At the same time, the engineers modified the adaptive dampers; at the touch of a button they compensate the hardening measures and provide a surprising amount of comfort despite all this sports performance.

The sound of the 5.0-litre supercharged engine that has been modified to produce 421 kW/575 hp is a force to be reckoned with. The purring engine responds to the slightest of movement to the right foot and thanks to 700 Nm torque and modified suspension, it is now able to dissect the most demanding curves.

One thing is certain: the Jaguar Project 7 is probably one of the few vehicles from the recent past of this brand that already has cult status and that will appeal to collectors and enthusiasts alike.

The vehicle on sale here was delivered to its commercial first owner in Germany on 7 April 2016 and was passed on and registered to its second and latest owner just a few days later, of course also in Germany. This second owner kept his Project 7 in his fleet for the next two years and enjoyed regular outings with it during the summer months. The car is in mint condition both visually and technically. It will be sold to its new owners newly serviced by us and with a brand new TÜV (MOT).

Please contact our sales staff for more details. Please note that vehicle sightings are only possible by prior appointment.